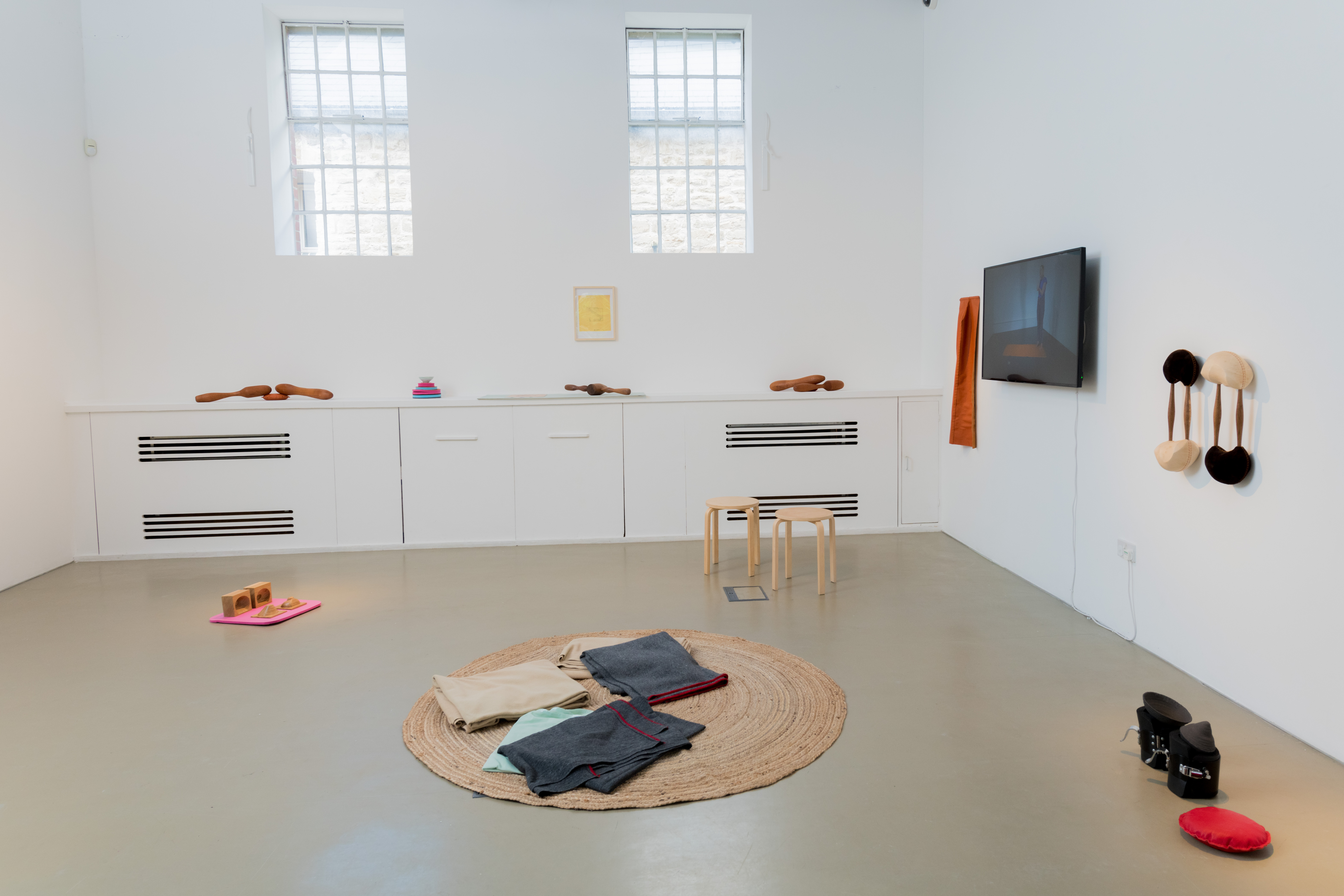 Craft of Convalescence brings together a selection of new works by contemporary jeweler and maker Rachael Colley and dancer Inari Hulkkonen. Invited to respond to the online resource ‘Index of Convalescence’, Colley and Hulkkonen explore the poetics of rest, rehabilitation and recovery.

Collaborating across sculpture and dance, the artists interrogate processes of object-making and handling in close proximity to physical exercise and somatic practice, considering sequences of action and gesture that connect the body to a given material, envelope it in task-based action and ground it in the time of the present.

Working through her lived experience of ASD and the autoimmune disease Systemic Sclerosis, Colley’s working processes are informed by a tension between physical frailty and the strenuous control required in traditional craft techniques. Negotiating this tension, Colley closely attends to the bodily rhythms of activity and rest, force and relaxation, gentleness and control in carefully poised working processes. The repetitive, undulating gestures of her craft begin to resemble a practice of convalescence tightly woven into the artist’s experiences of (chronic) illness, disability and grief. The time of craft as the time of convalescence opens the possibility for an equanimous dwelling in the present of a suspended interval.

Colley’s objects are ambiguous, yet saturated with a suggestive, citational field of reference to the overlapping environments of the domestic, the workshop and the gym. Whether by incorporating Yoga matts and blocks as sculptural materials, or by reworking the forms of tools in the metal workshop, objects take their leave from specific contexts of the artist’s everyday. Relaunched here for an as yet uncertain future context of use, they appeal to our imagination and coming experiment. Like the processes of fabrication from which they originate, their speculative futures are linked to a need and desire for new forms of rehabilitation. An ambiguous openness of function harbours the promise of another convalescence to come.

Hulkkonen’s movement practice is similarly informed by a process of negotiating the tension between the physical vulnerability of a singular body and the strenuous demands of control in traditional dance techniques. In her playful response to Colley’s practice and the wider thematic field of convalescence, equanimity’s calm finds itself persistently undermined by the exuberant efforts of its achievement. Within the loosely cited world of psycho-somatic practice, failure undermines the will to well-being, crisis re-erupts in the midst of recovery. Hulkkonen’s repetitive, task-based and searching rituals of physical and emotional rehabilitation become saturated with feelings of futility and frustration. Ambiguous sequences of concentrated movement teeter on the edge of the comic, absurd and sometimes tragic.

In their own unique ways, as well as in dialogue with each other, both Colley and Hulkkonen engage with an effort at wellbeing through physical and mental rehabilitation in ways that are delicately poised between convalescence and crisis, searching for a minimal grounding of body and mind in experiences of fragile instability.

Having taken its starting point from an engagement with the Index of Convalescence, the exhibition has in turn become an entry to the Index’s growing web of associative research on the practice, poetics and politics of convalescence. Camera and editing by Eleanor Sikorski.